THE ATTRACTIVENESS OF HAUTS-DE-FRANCE ACCORDING TO KPMG

Geographic location, infrastructure, innovation, quality of life… Five years after the last attractiveness study, how do foreign company executives view the region where they are based: Hauts-de-France?

What is the typical investor in this region?

If you were to draw a portrait of a typical investor, it would be a Belgian company in the service sector that wishes to accelerate its commercial development by the creation of a site ex ni hilo in the area of Lille.
The company would choose Hauts-de-France for its strategic geographical position. 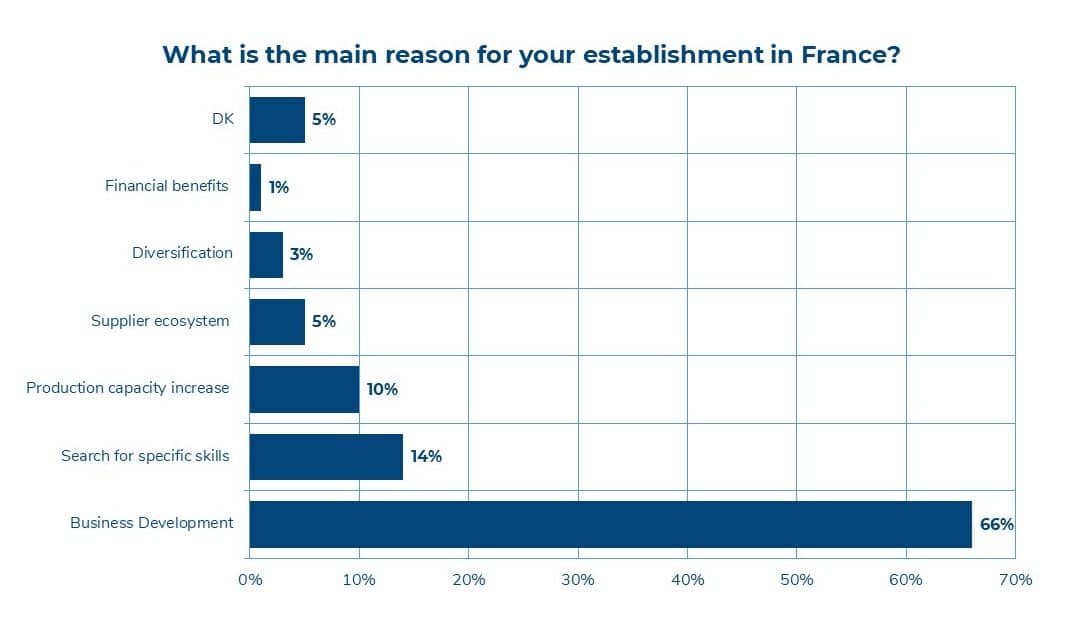 Although most of the companies in the region are European (75%), the top three also include America, which is the second most important continent in the region. 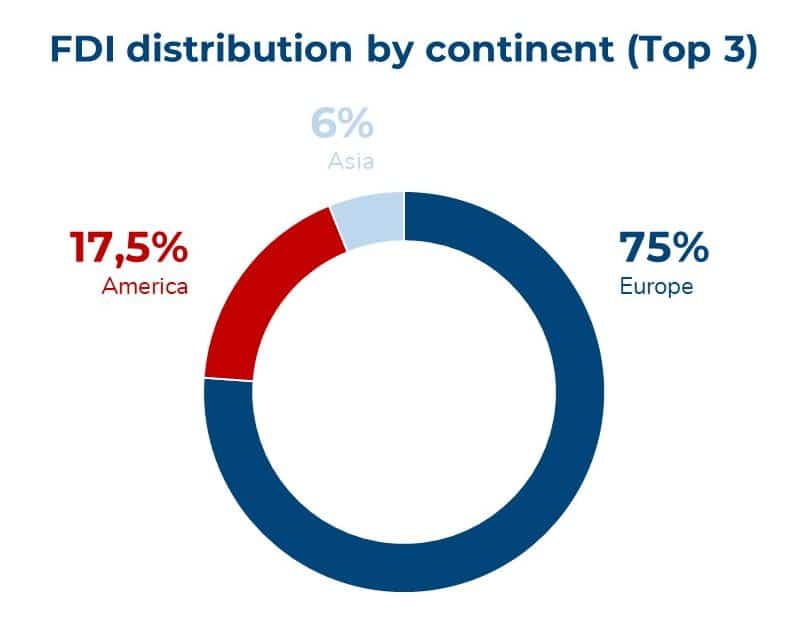 In terms of sectors of activity, the top 3 remain the same as in previous years, with the agri-food (especially in the south (75%)), automotive and services sectors.

The tourism sector is experiencing a particular downturn, dropping from 11% in 2017 to 4% for this new study. The Covid-19 crisis is certainly a contributing factor.

What do the companies based in Hauts-de-France think of the region?

Since 2017, the region’s image has changed very favorably for one out of two company CEOs. 70% consider that the region’s attractiveness has improved.

The result of the merging of Nord-Pas-de-Calais and Picardy, the large region of Hauts-de-France has had a positive impact on the attractiveness for 1 out of 4 respondents (and a negative one for only 6%!)

In retrospect, their setting up in the Hauts-de-France region is (almost) unanimously praised by the companies surveyed: the satisfaction rate is as high as 95%!

A satisfaction that translates into a willingness to recommend the region: 84% of companies surveyed (8 out of 10) are willing to recommend it to their peers.

And 28% of them have already done so, compared to 17% in the previous survey.

Finally, 85% of the companies consider their location in Hauts-de-France as something positive.

53% see it as a real asset, and a third as strategic (a score that has increased by 4 points since the last study), especially in the service sector.

Why set up in Hauts-de-France?

The respondents, all international groups that are already present in the region, listed 5 ideal location criteria that were compared to the region’s major assets. 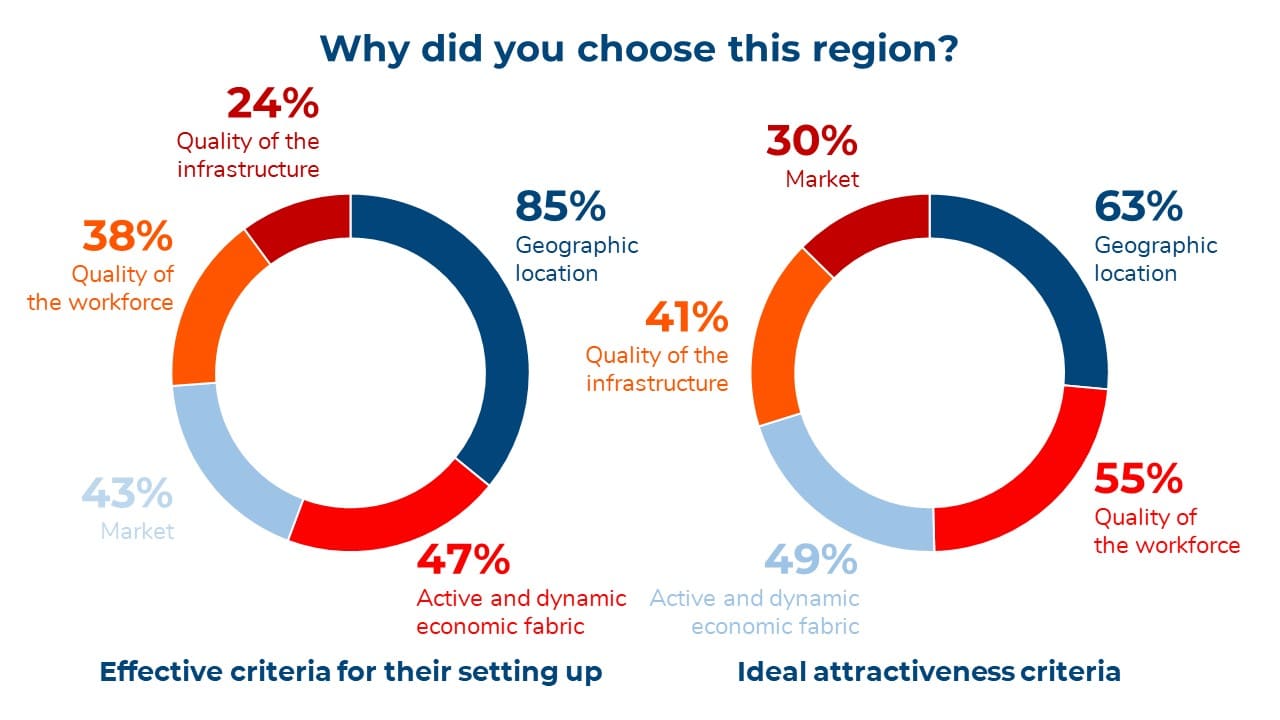 Regardless of the company’s sector, they are almost unanimous (85%): the region’s strategic location at the heart of one of Europe’s major hubs tops the list of criteria for choosing this location.

The regional mobility infrastructure is also perceived as a key advantage, compared to other regions (65%).

30% believe that the network has evolved favorably and even very favorably since the last survey.

The economic fabric, which is both active and dynamic, and markets that are accessible to companies are important criteria, with 47% and 43% of votes respectively.

The region performs well when it comes to real estate costs, which are appreciated by 13% of companies, while the expectation of companies in this area before they set up is only 6%.

Often praised, the workforce is one of the region’s great attractions.

For the most part, it is local (76%) and even regional (18%), and is very well perceived by the groups, with a positive evaluation by 84% of respondents. 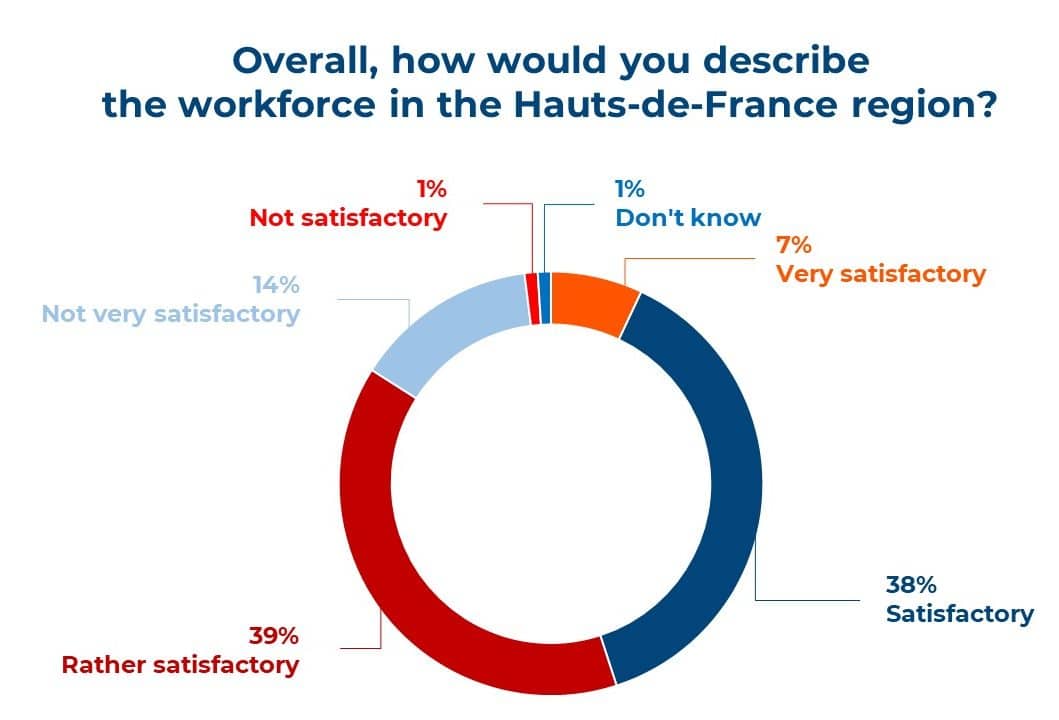 A word of caution, however, this figure is down from the 2017 study where it reached 91%. 36% of respondents believe that the quality of the workforce has changed unfavorably over the past 5 years, compared to 23% who believe it has changed favorably.

This satisfaction rate is still very positive, in a climate of national (and even international) HR problems, as mentioned by the international groups that attended the 2nd Investor Day in the Hauts-de-France region in October.

The recruitment difficulties that companies encounter (representing a level of dissatisfaction of 70%) are, locally, counterbalanced by a positive social climate.

According to the companies based in the region, language skills and easy recruiting are the top priorities for improvement on a national scale, as are local employability and the attractiveness of recruiting talent from outside our borders.

5. A proven quality of life

Despite the health crisis, the evolution of the quality of life over the last 5 years is considered as favorable by one out of two respondents.

What attracts foreign companies to this region?

With these 5 major assets, has the region suffered from a lack of investment since the health crisis and how do companies perceive the economic outlook in the region in the short and medium term?

Not surprisingly, the Covid-19 pandemic impacted over ¾ of the companies surveyed.

But what are the concrete consequences in terms of internal organization and investments?

1. Economic crisis, a driving force for change in the way companies operate

While 50% of respondents claim to have been negatively impacted, a quarter of them see positive consequences stemming from the crisis.

Whatever the feeling within companies, the economic crisis has brought about a real revolution in working methods.

For 79% of the respondents, it is at the origin of an acceleration and even a normalization of teleworking and the introduction of the associated tools for remote meetings and exchanges.

A large majority (84%) also declare that they have introduced measures to promote well-being at work.

2. A decline in planned investments but economic prospects in the short and medium term

Most of the investments made during this uncertain period were mainly for internal restructuring that allowed for the crisis to be overcome (digitization & equipment, business maintenance & recovery).

As a result, investment projects decreased by 26% (postponed or canceled).

But buoyed by the post-crisis rebound, economic activity has been favorable in the Hauts-de-France region, and even more so at the group level (73% in 2022 vs 63% in 2017).

And the medium-term outlook (2 years) appears to be promising:

3. CSR at the heart of corporate strategies

We should also note the predominance of CSR concerns, which are now central to strategies.

5 years after the last study, the CSR issue has taken on considerable importance.

Nearly 6 out of 10 companies have a durable investment project in the more or less short term (58% in less than 2 years and 35% between 2 and 5 years).

This is particularly true for industrial sites (72%), with a focus on reducing the energy consumption of equipment and developing products with a reduced environmental impact.

This development was anticipated by the Hauts-de-France Region, which has been offering the Rev3 program for several years to support companies in their ecological transition and circular economy projects.

4. Is the health crisis a source of relocation?

Although 87% of the respondents consider that the crisis did not have a real impact on a possible relocation strategy, 1 out of 10 companies affirm that the shortages they experienced led them to accelerate this process.

In our article, you will discover the 3 dangers of the remoteness of sites that companies have faced during the crisis period and that have encouraged them to relocate their production.

5. The public authorities are there to help!

Finally, it is important to highlight the work done by the public authorities during the crisis period.

65% of respondents said they were satisfied with their support.

It should be noted that nearly one company out of two has received support for its operational activity from regional authorities and institutions.

Start your project in Hauts-de-France

I want to be accompanied for a ...

Setting up my business
in Hauts-de-France

Taking over a company
in Hauts-de-France

Selling my business /strong>
in Hauts-de-France

Learn more
See all the news

See all the news