5 good reasons to expand in the French agrifood market

Would you like to set up a new food production site or a logistics center in Europe?

In your location study, you will first compare the different national markets in order to choose a location.As an agricultural powerhouse with a dense agri-food ecosystem, France has a number of key advantages for prospective entrepreneurs.

In this article, we will present 5 excellent reasons to consider the French market for your agribusiness development project.

The agrifood industry, the leading industrial sector in France

For project leaders, the strength of the agri-food industry in France is an advantage. Indeed, the agrifood industry is the leading industrial sector in France:

The strength of the French agrifood industry is based on the diversity of agricultural production, which is made possible thanks to the country’s geography and its variety of climates. Indeed, from the North to the South of the country, French agriculture produces a wide range of fruits and vegetables, as well as cereals, meat, plant-based proteins… In addition, there are the fisheries resources offered by the coastal areas.

This agricultural diversity has led to the creation of a dense agrifood ecosystem, which is mainly dedicated to primary processing. In France, agrifood companies process about 70% of the national agricultural production.

By choosing France for your future production site, you will have the best conditions to find raw materials in the vicinity. In addition, our dense ecosystem of suppliers and subcontractors makes it easy for you to do business.

Finally, France ranks 4th in the world for food exports. 21% of the French agrifood industry’s revenues are generated by exports. This figure can be explained by the presence of several world leaders in France (Danone, Lactalis, Pernod-Ricard…) and also by the value of “made in France”.

An ideal location at the heart of European markets

France’s geographical location at the crossroads of European markets is obviously an advantage if you wish to develop or intensify your presence on the Old Continent.

Indeed, France has land borders with Belgium, Luxembourg, Germany, Switzerland, Italy and the Iberian Peninsula. The proximity to the United Kingdom, by sea or via the Channel Tunnel, must also be considered.
All in all, a location in France gives you direct access to the densest and most prosperous areas of the European continent.

From this point of view, the example of Hauts-de-France is particularly relevant. By locating your new site in this region, you have access to a market of 78 million consumers within a radius of 300 kilometers, including several major European cities (London, Cologne, Amsterdam, Paris, Brussels, etc.). In addition, the excellent infrastructure network of the Hauts-de-France region makes this market more accessible.

Whether you need direct access to your catchment areas or efficient transportation infrastructures to reach your markets, France has what you need. Indeed, France is endowed with road, rail, river, airport and maritime infrastructures of sufficient quality and density to meet your needs.

The value of “made in France”

The “made in France” label brings added value to your food production, regardless of whether you target the French or international market.

At the national level, French consumers are very attached to the proximity, traceability and quality of products. The consumption of food products “made in France” is a way to defend societal or environmental values:

When asked which sector they would favor for products made in France, 67% of French consumers place food products in first place. 77% of them are even willing to pay more to buy French products. This desire to consume products “made in France” has even been accentuated due to the health crisis.

For us, the “Made in France” label is an undeniable advantage. In the French market, this is obvious. For the Asian market, and for the entire Asian continent since we deliver 30% of our production to Asia, the fact that we make luxury ice cream that is made in France enhances the image of a quality product. This is clearly an advantage for our market development in Asia.” David Caron, Director of the Häagen-Dazs plant in Arras

An attractive destination despite preconceived ideas

Many large international groups such as Herta, McCain, Häagen-Dazs, Nestlé, Coca Cola, and Cargill have chosen to locate in France. However, certain preconceived notions about the French market persist.

Misconception #1: “France is not competitive in terms of costs”. This is false. In 2019, labor cost competitiveness in France is at the same level as in Germany and the Benelux countries. 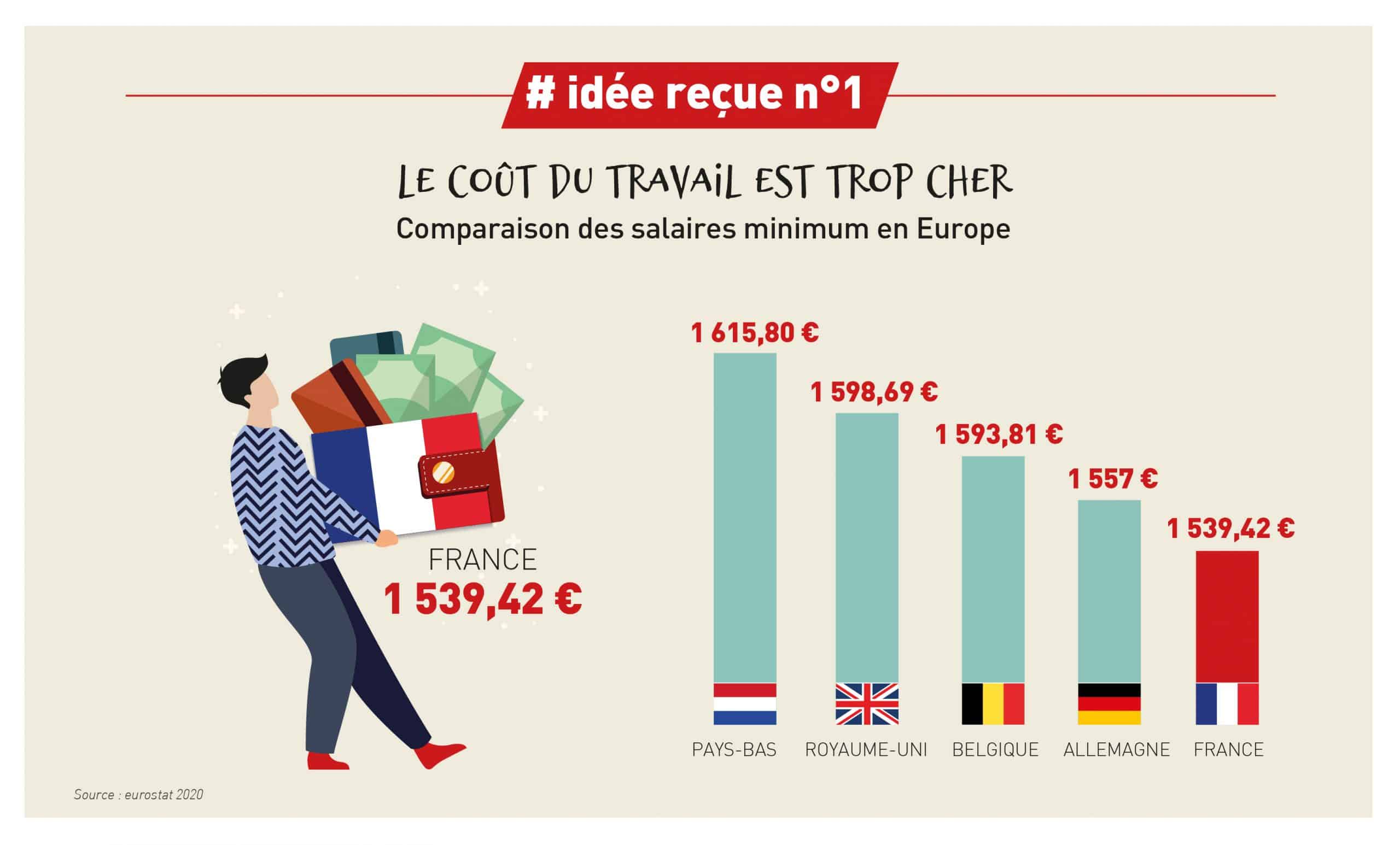 In recent years, there have been a number of reforms aimed at bringing French tax rates into line with those of other European countries:

Sometimes perceived as too rigid, the organization of labor in France has become more flexible. Several measures allow for an extension of the working week beyond the 35-hour limit. In addition, the use of temporary workers makes it possible to adapt to production needs.

Another lingering idea is that it is impossible to lay off workers in France. However, the Labor Law has greatly simplified economic dismissal by broadening the criteria that allow for its use.

Finally, the procedures for creating a legal structure in France are now faster than anywhere else in Europe: 4 days… compared to 13 on average!

Local partners for your success

Finally, the presence of local partners makes it easier for you to set up in France.
Before setting up your business, you can count on economic promotion agencies, such as Nord France Invest in Hauts-de-France, to help you with your project.

Territorial economic promotion agencies can help you to:

France offers a very favorable context for agri-food companies that want to set up in the country.

France’s geography, the variety of its products, the density of its agri-food ecosystem, the strength of the “made in France” label and, more recently, the efforts made in terms of taxation and the simplification of procedures for setting up operations all contribute to France’s attractiveness as a destination.

In our latest white paper, discover how France remains a strong territory for the agri-food industry, thanks to its geographical and historical advantages, and the innovation dynamic of its stakeholders.