Investor Day 2021: What do international executives think about the Hauts-de-France region’s economic attractiveness?

On Tuesday 14 September, at the request of Regional President, Xavier Bertrand, the Hauts-de-France Region organised its 1st Investor Day in partnership with Nord France Invest and Entreprises & Cités.

This unique event gave foreign investors in the region a chance to give their feedback on the strengths and levers needed to drive the region’s economic attractiveness.

With 150 present at the region’s headquarters (due to COVID restrictions) and one hundred joining remotely, this first edition was an overwhelming success.

Nord France Invest brings you the highlights from this productive morning.

At the first roundtable discussion, the directors of Siemens, Brandquad, Procter & Gamble and Mondelez International highlighted the region’s strengths:

“Hauts-de-France is an extremely central region which enables us both to serve our French consumers perfectly and also to export globally.” Béatrice Dupuy, President and General Manager, Procter & Gamble France and Benelux

“An understanding of the challenges we face as industrialists and as companies by local authorities is extremely important. It’s a key factor in the region’s attractiveness.” Amélie Vidal-Simi, President, Mondelez France

“When choosing our location, we based our decision on 5 criteria: geographic location, knowledge of the retail/wholesale sector, the talent pool, the level of English and the cost and quality of life. One year on, I think we made the right choice, and we’re here to stay.” Anthony Despres, Managing Director Europe, Brandquad

The region’s structural assets are enhanced by tailor-made support meeting companies’ need through a genuine understanding of the issues faced.

“When we moved here, the Region showed us how ready it was to fight for us and support our project” Didier Leroy, Chairman of the Board, Toyota Motor Europe

“We had the opportunity to remove all the administrative hurdles, and we had the unfailing support of the local authorities. That was absolutely decisive for us” Amélie Vidal-Simi, President, Mondelez France

During the 2nd round table discussion, Jean-Pierre Letartre, the morning’s host, surveyed General Mills, Kubota, IBM and Ecolab about the challenges that need to be met to strengthen the region’s attractiveness both nationally and across Europe. 4 key challenges emerged:

“The region needs to develop its network of international institutions throughout the training cycle and the territory” Andrea Ceriani, Industrial Operations Director, Kubota Farm Machinery

“Hauts-de-France has a great hand to play creating jobs in the digital sector to combat the talent shortage by focusing on education and professional re-training.” Béatrice Kosowski, President, IBM France

“The two fundamentals of economic recovery are technology and the environment”

David Martin, Vice-president Managing Director France and Belgium, Ecolab, concluded his contribution by advising the agencies that support local investment to go the extra mile by offering companies “best practices” to implement and help them integrate perfectly into the local business environment.

“It could be really interesting to offer investors additional services, beyond the administrative hurdles, around best practices to face tomorrow’s challenges, such as CSR, the ecology and more.” 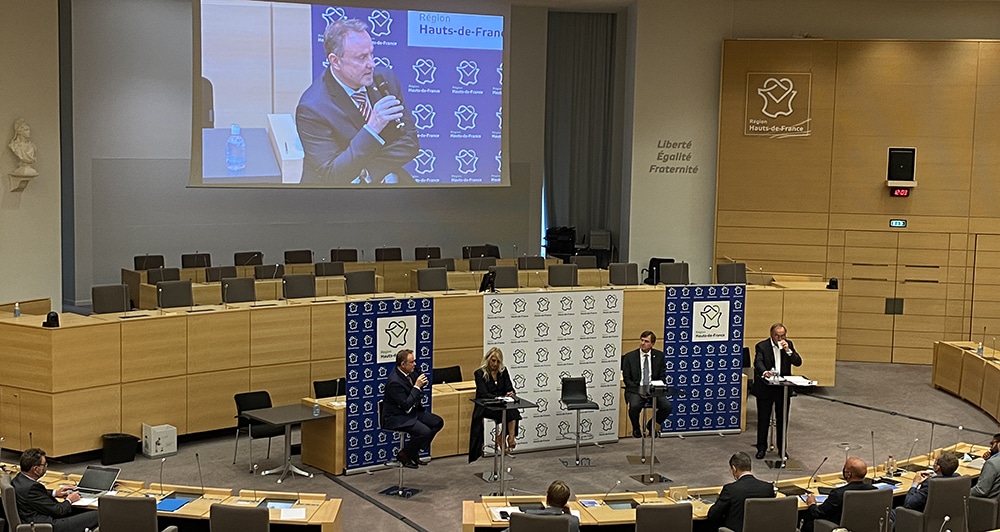 Dickson Constant and Toyota: two companies that chose to re-invest in Hauts-de-France

This morning of discussions was also an opportunity to hear from two companies about how they first established a presence in Hauts-de-France:

Didier Leroy, President of the Board, Toyota Motor Europe, and Eugène Deleplanque, President- Managing Director, Dickson Constant, spoke about why they chose the Haut-de-France region, and more importantly, the factors that drove them to re-invest and expand in the territory.

Hear their testimonials and discussions in the event replay:

Back to news overview

Häagen-Dazs invests €16 million to expand in the Hauts-de-France region.